Witches at the Abortion Clinic "Blessing'

How deeply are abortion clinics connected to witchcraft?

Christians from all over Ohio who stood together to protest a “sacred blessing” ceremony at a Columbus, Ohio abortion clinic on November 9 discovered the volunteers and staff may be quite involved.

The biased news coverage from the Columbus Dispatch fawned over the “faith” of the six or so people at the clinic ceremony.

Outside, however, those on the lines of protest saw just exactly what kind of “faith” was involved. They discovered evidence of sorcery and symbols of witchcraft rituals performed before they arrived.

These abortion abolitionists stood bravely in the spirit of Jesus against the palpable presence of spiritual darkness. Their demonstration was organized by activist Sarah Cleveland, who obtained a protest permit ahead of time and notified the police of the plans to demonstrate. The police arrived and spoke politely with the protest organizers.

These are serious, committed, kind Christians. But they are nobody’s fools. They’ve seen the scoffing faces behind this violence and the depths of depravity to which humans can 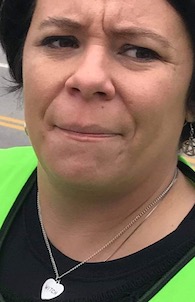 Operating an abortion clinic is the bottom of the barrel. And it isn’t the first time these protesters have encountered sorcery while standing in vigilance outside child death centers.

According to the Dispatch, one of the abortion advocates at the event said, “We want to show there are people of faith who support bodily rights.”

Not true. Abortion ends the bodily rights—and kills the body—of an unborn child.

A female clinic “escort” dressed mostly in black approached the Christians, whose numbers swelled to around 50 at one point. With her cell phone, she videotaped their songs and Scripture readings but ignored attempts to engage her in conversation.

One protester approached her politely and asked if they could talk for a second, confessing she had once been a volunteer at Planned Parenthood before a change of heart.

The escort glanced at the protester but turned coldly back to her phone. Michelle, as people knew her, began to weave among concerned crowd who had gathered prior to the planned “sacred blessing” by apostate faith leaders at this chemical abortion facility.

The abortionists seem to fear the protesters and the One who inspires them. The ceremony location had been scheduled for weeks at the Planned Parenthood surgical abortion facility at 3255 E. Main Street in Columbus. After nationwide publicity, the event was moved the day before to an innocuous-looking “Your Choice Healthcare” clinic set back off the busy intersection of Karl and Schrock Roads in northeast Columbus.

It’s a chemical abortion facility. Ironically, this clinic is directly across from a day care center.

The stone-faced clinic escort appeared to be in her thirties. She was eventually joined by others in rainbow-adorned escort aprons, signaling the growing solidarity between abortion advocates and homosexuals. One rang a cow bell to drown out preaching and Scripture reading.

As Michelle began to weave among the demonstrators, trying to intimidate them, they began to discern what else she might be doing: a ritual or spell of some kind.

Then they noticed her earrings. Pentagrams. Witchcraft symbols.

And there was other evidence of witchcraft. Odd thorny little wreaths were scattered along the sidewalk, where there was also an occult symbol drawn in chalk. Someone also noticed an apple that had been split and re-stitched with black thread.

The wreaths may have been a “protection” spell with possibly a more nefarious purpose like a “hex,” but under all the prayer covering, praises being raised, and sharing of Scripture, none of the protesters were concerned. They knew the Lord went before them and remained with them.

Perhaps the clinic folks sought protection from those protesting? Well, those who expose this evil are not the ones to be feared.

The One they should fear is the One who has power over body and soul. Unless they repent, these folks are in serious, eternal trouble.

Then the abolitionists spotted what looked like a piece of jewelry, but on closer inspection was a tiny pentagram, similar to the escort’s earrings. The symbol drawn in chalk on the sidewalk resembled the triple moon symbol of Diana/Artemis, the alleged goddess in ancient Roman/Greek legend associated with fertility and even childbirth.

Childbirth? If only! This place is the opposite-- an extermination site.

The moon symbol can also represent three phases of life, death and rebirth, or three stages of womanhood—maiden, mother, crone.

In other words, witches love this symbol.

The Christian protesters politely persisted in witnessing, preaching redemption and mercy, telling the escorts that spells were pointless since Jesus Christ reigns over all. They sang, “Great is Thy Faithfulness” and “He’s Got the Whole World in His Hands.” They told Michelle that Jesus is greater than Satan or any god a person can imagine. One fellow read Scripture and witnessed sensitively, even with the persistent cowbell in the background.

The demonstration signs expressed various messages of grief and horror over the evil practices of this clinic. “Human sacrifice here” read one, with an arrow pointing to the building. Another held by a black Christian brother read, “Black Lives Matter in the Womb, Too.”

Others read, “Make Parenthood Great Again—Abolish Abortion” and the bottom line of it all, “Babies are Murdered Here.”

The fearless organizer, Sarah, wore a sweatshirt with this verse-- “Rescue those who are being taken away to death” (Proverbs 24:11).

When the original clinic escort was joined by several colleagues, they unveiled their own signs and stood proudly defending death in front of those protesting death. The clinic-endorsed signs included the web site of the Ohio Religious Coalition for Reproductive Choice and read, “Pro-Faith. Pro-Family. Pro-Choice.”

Yes, it’s obvious what kind of “faith” was involved here. And tragically, we know the deadly “choice” offered as well.

And because of that, there is no “family.”

Pray for these clinics to close and for these hard hearts to turn to the Lord and repent.