The door is now wide open in many public schools for corrupting teachers to enter and poison the minds and bodies of impressionable children. 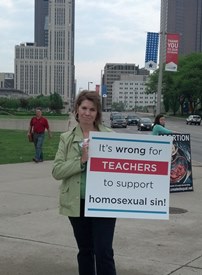 Most teachers try to do what’s right, but with so-called “non-discrimination” school policies in place, sexually immoral adults or pro-abortion/“LGBTQ” activists cannot be barred from classroom access to children.

And now in New Jersey, it’s easier than ever, since “gay” indoctrination just became a state requirement. Beginning in the 2020 school year, NJ schools must teach that homosexuality and gender confusion are wonderful and normal behaviors with a legacy of brave heroes.

This will be, of course, a bald-faced lie.

The timing is ironic. Just two weeks before this deviance-mandate bill was signed by New Jersey’s Democrat governor, Mission America received a distraught email from a mother in north central New Jersey. She contacted us after reading articles on our web site, and provided infuriating details about her son’s private corruption by a teacher allied with GLSEN, the Gay, Lesbian and Straight Education Network.

Here’s what she wrote:

“I want to share my story about how this messed up my son and how I pulled him out. We live in [an area] in New Jersey where most families are traditional….It was just few months ago. I found out as I saw the book Aristotle and Dante Discover the Secrets of the Universe in his backpack and he told me the teacher was teaching about gender stereotypes. It was around November 2018, I said OK to this as this was a school writing project.

“Soon I found changed behavior in my son and his friends. Around 16 kids and one of the teachers had already influenced them to start an LGBTQ Instagram group without the knowledge or consent or any of the parents! Fortunately, I saw some of the posts when my son left his computer on …...and these kids were online posting mature LGBT content jokes and videos. I strongly objected and took it up with the school.”

The mom went on to explain that the teacher kept a selection of pro-homosexual books in her classroom, which she encouraged the middle schoolers to read:

“If I had not seen the effects of this propaganda on my own 13- year -old son and his friends, I would never have believed that any propaganda can influence perfectly straight boys. My son who has never questioned his gender and identified completely as a young boy suddenly started talking about gender fluidity and wanting to wear more androgynous clothing. It was only when I saw his Language Arts teacher-- an active GLSEN ally --and her notes to him where she is selling this fluidity to very young minds under the pretext of preventing them from ‘bullying.’”

So how is her son doing now? The mom reported that “by God’s grace” she was able to convince her son to leave these influences behind, but “…it took a lot of time, effort and loving guidance.” She added, “I faced a wall initially as school authorities have already brainwashed these kids against their 'gender conforming’ parents who are mainly ‘responsible’ for depression and suicide among LGBTQ youth. Gender expression is presented as a civil right.”

And this happened before New Jersey mandated “gay” propaganda. The new law makes it easier for activist teachers and administrators to breach boundaries while advocating perversion to kids.

Colorado has an similar bill on the table . It would include homosexual-friendly sex education. In Illinois, lawmakers attempted last session to pass what would have been the most radical bill in the nation, mandating “LGBTQ” lessons beginning as early as kindergarten. Now in 2019, a reintroduced bill recommends the same sweeping, immoral indoctrination.

California passed the first such bill in the country, with curricula honoring the most extreme perversion and shutting out opposing views as “hate.”

This is not about “social justice,” but about social engineering experiments using children, often without parental knowledge or consent.

And we can all expect even more extreme lessons as spring unfolds. After all, this is the season of the annual GLSEN “Day of Silence (DOS), ” this year on April 12.

Are elementary schools beginning to observe DOS, a contrived “LGBTQ” propaganda event using “anti-bullying” as a Trojan horse? It seems that some are.

In California last year, a “diversity week” was planned at Betsy Ross Elementary School in Anaheim. It was to occur in late April, suspiciously timed to possibly correspond with the 2018 “Day of Silence” observed in many middle and high schools.

But there’s good news. Brave and outspoken parents affiliated with Mass Resistance strongly objected to the planned indoctrination. Extremist GLSEN materials and even HRC’s “Welcoming Schools” program were the focus of teacher training. But the planned “diversity week” was scrubbed, praise God, because of the push-back by concerned parents led by a social worker mom who blew the lid off the planned corruption.

California’s “FAIR Education Act” has enabled radical homosexual and gender confusion lessons throughout the state’s classrooms. And the California “Healthy Youth Act” in 2015 mandated “inclusive” sex education. Parents are just now understanding what “FAIR” and “inclusive” mean in gay-speak. These lessons distort what they call “LGBT history,” morphing known sexual predators like Harvey Milk and other deviant activists in this movement into heroes.

In many schools parents are prevented from knowing about a son or daughter’s experimental gender “fluidity.” Schools are becoming allies with sin and corruption, often keeping parents in the dark about life-threatening behavior.

As these new laws roll out, students are conned and put at-risk by a phony, positive spin on homosexuality and gender rebellion. It’s completely undeserved and fails to reveal the truth about the spread of disease, the anti-Christian hostility and the cultural damage done by this movement.

When it comes to “LGBTQ” behavior, our kids should be given warnings—not endorsement.