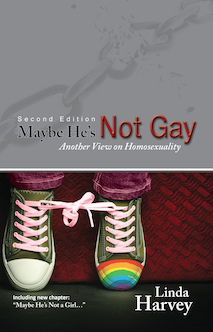 Looking for a stimulating small group study on a current yet timeless Christian issue? Your group would be blessed by an in-depth study and discussion of Linda Harvey’s book, Maybe He’s Not Gay: Another View on Homosexuality.( See more about this book, including how to order, HERE.)

We recommend this as a study for ages high school to adult.

Below are suggested questions to guide your discussion. Before your group begins, please go to the page on our web site and review the Scripture passages that relate to homosexuality, gender confusion, and marriage, HERE.

Chapter 1 (Please read each chapter first, then consider the questions for that chapter.)

1. Why do you think humans are created as two types, male and female? What are some possible reasons God decided on this form for the human race?

2. Do you believe there is an absolute truth? Are some things simply true and other things untrue? Why is that important for the way people live their daily lives?

3. What are some things you rely on that depend on the actions of other people, some of whom you don’t know?

Discuss:
How bridges are constructed with precise measurements
Food or beverages purchased at a store are not spoiled or contaminated
Keys operate for the locks designed for them
Medication is effective and not harmful

4. Should people do everything they want to do? Have you thought about doing something and decided not to? Why did you change your mind?

5. Discuss actions or behaviors that some people find appealing but are often harmful, even addictive.

6. Have you ever known someone who refused to acknowledge the truth about a situation, even when it was right before them? Could communities or even nations do this? Can you think of historical examples?

7. If homosexuality does not have a genetic origin, why does it seem almost impossible to have a discussion weighing its benefits compared to its problems?

8. Do you believe that the only reason to object to homosexuality is because of “hate”? Are there non-hateful reasons to question this behavior?

1. Do you think accepting homosexuality and gender change might have a big impact on a society? What are some of the ways it will affect how people live, behave, raise children?

2. Most homosexual advocates believe it’s okay for students as young as middle school to have sexual contact with each other. What do you think about this? Are there some reasons why our culture might want to teach the benefit of waiting?

3.Should small children decide to label themselves as “gay” or “lesbian,” or be allowed to dress in the clothes of the opposite sex and have an opposite sex name? What about taking sex change hormones? (This is happening now in parts of America).

4. How are homosexuals who feel empowered already changing our culture? Review the scenarios listed on pages 30-33 and discuss your own experiences. How would such situations have been addressed in earlier times?

5. Advocates of homosexuality used to say that “it’s no one else’s business what two people do in their bedroom.” Discuss how this idea has changed now that laws are being passed that seem to make it everyone’s business and forcing people to publicly accept homosexuality and gender change.

7. How will such lessons affect children as they develop? Does approval of homosexuality mean a child is more likely or less likely to have a strong faith in Christ?

8. Some students in middle/ high school now decide to explore being “bisexual.” Is this a positive trend? What are some of the possible social, moral, health and spiritual outcomes of such experimentation?

9. What is the new secret fear of many young adolescents that they never share with parents—until, sometimes, it’s too late? What influences are bringing this into the lives of kids?

1. What are some of the observable trends in human history and current culture that show homosexuality to be quite changeable and that it’s unlikely anyone is born this way?
Discuss:
Celebrities who flagrantly experiment with same sex relationships and then leave them behind.
Prison inmates who participate in homosexual behavior during incarceration and then do not continue once released.

2. Were you aware that no research has conclusively proven a genetic, hormonal or biological origin for homosexuality? Discuss the possible impact of this reality on laws that defend a homosexual “sexual orientation.”

3. Do you know any people who are former homosexuals? What do you think about the intense effort to silence these people?

4. Discuss the harm being done by groups promoting homosexuality and gender confusion to children, like the group GLSEN, the Gay, Lesbian and Straight Education Network.

5. For more in-depth reading on the “gay gene” question, go to these excellent web sites:

2. Are you aware that parental consent is needed for even minor medical treatment at schools? Are children allowed to take a Tylenol without a parent's okay?

3. How does this compare to schools that are encouraging children to embark on sex "change" therapy-- sometimes without a parent's approval or knowledge?

4. Does the rush to embrace gender confusion seem like responsible health care, or a fad?

1. About two thirds of all HIV in the U.S. is the result of male homosexual sex acts. Discuss why you think the public is not really aware of this.

2. Discuss the high health risks of homosexual behavior, and why these outcomes are more prevalent among those involved in this lifestyle, such as:
Sexually transmitted diseases
Emotional disorders
Substance use
Domestic violence

3. What is the impact on the American public of 50,000 new HIV infections each year in the U.S., with 30,000 from homosexuality? How could this be prevented?

4. Given that homosexual males are prone to much higher rates of promiscuity than heterosexual males, how quickly does HIV tend to spread as a result? What does this mean for the 13- year- old boy being told that he should explore being a homosexual if he wants?

6. Can two men or two women ever be actually “married”? What did Jesus say about marriage?

7. Should a Christian baker be permitted to say “no” to baking a same sex wedding cake? Are you aware that most major homosexual groups want the right to say “no” to become illegal in America, a right which reflects the freedom of religion in the First Amendment? Discuss the potential impact on the Christian church in America.

1. Are parents an obstacle to the young person who wants to declare a “gay” identity? Or is the truth closer to this: that parents may be the ones giving the best advice to their child for his/her long-term well-being?

2. Homosexual defenders frequently say something like, “I was kicked out of my church.” Do you think this happens frequently?

3. Are you aware of any church that preaches often about homosexuality as a sin? Or do you wish pastors would address this issue more often and give doctrinally –sound direction to the congregation?

4. Are you familiar with the Bible’s concept of sin? Discuss what you think sin is and is not.

5. Who decides what a sin is? Do humans understand every reason for what is called a sin in the Bible?

6. Do you believe some Christians are hatefully attacking homosexuals by opposing their political goals? Or is there another view—that this debate was started by homosexuals and they should not be surprised when Christians responsibly defend their position?

1. What are some of the factors leading to same sex attractions?

2. Why does it make sense that the child who is physically or sexually abused would have confusion about sexual matters?

3. If homosexuality becomes widely accepted, even though there’s no evidence some people are “born that way,” won’t we be embracing a disorder often caused by dysfunction or abuse? What is a better approach?

4. Even if a person can figure out what led to same sex attractions, can he or she still make a choice about following them or living more responsibly? Or is it inevitable that they will become homosexual?

1. Discuss the benefits of abstinence from sexual experience for every young person, both heterosexual and homosexual. What are the benefits of waiting until marriage, or at least until adulthood?

2. The Bible is clear about sexuality being reserved for one man, one woman marriage. Not every person in the Bible adhered to the marriage standard, because polygamy was present. Was polygamy ever explicitly endorsed by the Lord?

3. Read 1 Corinthians 6: 9-11. Among the colleagues of the Apostle Paul were former homosexuals. So Paul was quite familiar with the struggle some people experienced with this temptation, as with other sins. Why do you think this passage and all the Bible’s verses condemning homosexual acts as sinful are dismissed by today’s self-labeled “gay Christians”?

4. Many people encourage those who have same sex attractions to understand God’s power to change sin. What would you say to a young person in your family who felt discouraged about same sex feelings?