These are sado-masochists, as in whips, chains, handcuffs… CLAW featured private workshops teaching the most depraved human activities imaginable short of murder. CLAW appeals mostly to homosexual males who are so lost, they employ bondage, spanking, role playing as slaves or animals, and dabbling in human waste products as the core activity of intimate relationships with other humans. After these workshops, just imagine the follow-up sexual acts that surely took place in the privacy of rooms – rooms occupied the next night by your 5 and 7-year-old children or grandchildren… As Christians, we are to have nothing to do with the unfruitful works of darkness, but rather to expose them. (Ephesians 5:11) 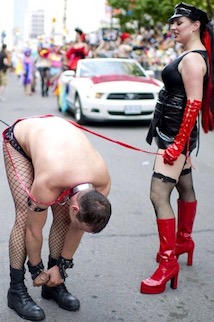 We are calling on the Mayor of Cleveland, Cleveland Dept. of Public Health, Cleveland City Council, and Cuyahoga County Council to halt this unsafe event!

Learn more about what goes on at CLAW (Caution; X-rated)

· What Has Sexual Orientation Non-Discrimination Wrought?(AmericanThinker.com, May 2018).